BLUE MAJIK: One of Nature's Best Healers for You & Your Pets 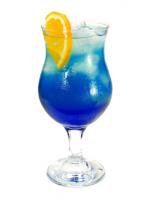 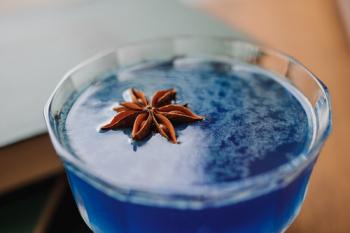 To listen to my interview on the national program This Week in America on The Danger of EMFs & The Benefits of GROUNDING/EARTHING, and why it's essential to take Blue Majik daily to detoxify EMF damage in the body and so much more, please click HERE. 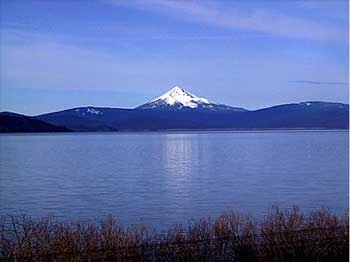 What is Blue Majik? It is a certified, organic proprietary extract of Arthrospira platensis, a nutrient-dense AquaBotanical cultivated from the pristine Klamath Lake in Oregon pictured here to the right. It is made up primarily of Phycocyanin, a powerful antioxidant which can quench free radicals and has been shown to be a potent natural COX-2 inhibitor. I take the powder and capsules of this pure phycocyanin every day and also highly recommend it for all of your beloved pets.

I love mixing the BLUE MAJIK powder into a clear glass of freshly made alkaline water. It's the most beautiful blue/cyan color ever—close to the color of the sky in the photo above, where they harvest the product. Drinking this blue elixir beverage daily is detoxifying, rejuvenating, and invigorating. It will enhance your health in countless ways.

Phycocyanin is a powerful water s 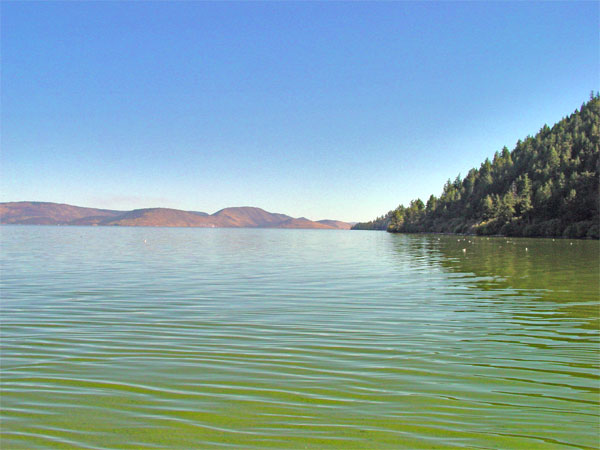 oluble antioxidant. Scientists in Spain shows that an extract of Spirulina containing phycocyanin is a potent free radical scavenger and inhibits microsomal lipid peroxidation. (Pinero et al, 2001). Spirulina has many different types of antioxidants, and the unique nature of phycocyanin makes Spirulina a level above other antioxidant foods or formulas. It is the phycocyanin in Spirulina that is thought to help protect against renal (kidney) failure caused by certain drug therapies administered in hospitals. Phycocyanin has also shown promise in treating cancer in animals and stimulating the immune system (Iijima et al 1982). A recent study showed that phycocyanin is a pow 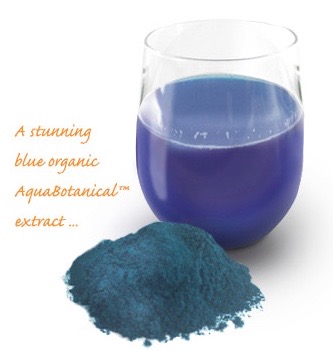 A great deal of research has been done in Japan on phycocyanin. The Japanese have found the phycocyanin protects the liver and the kidneys during detoxification, as well as activating the immune system. Researchers at the Osaka Medical Center for Cancer and Cardiovascular Diseases said: “Spirulina is surmised to potentiate the immune system leading to suppression of cancer development and viral infection.” Their human clinical study showed that a hot water extract of Spirulina rich in phycocyanin increased interferon production and NK cytotoxicity (cancer killing cells) when taken orally. (Hirahashi et al, 2002). Continue on for more eye-opening information. 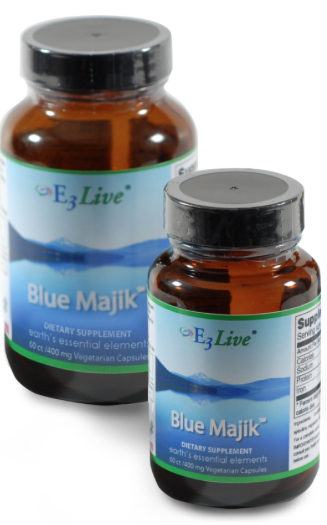 Cuban scientists have also been looking at the many properties of phycocyanin. Animal studies done with rodents showed that phycocyanin has anti-inflammatory activity due to prostaglandin E-2 inhibition (Romay et al, 2000) and that it reduces allergic inflammatory response and histamine release from cells (Remirez et al, 2002). Another study indicated that Spirulina had an anti-arthritic effect in mice, which they said may be due to the anti-inflammatory and antioxidant properties of phycocyanin (Remirez et al, 2002).

An interesting study was done in Ukraine (where Spirulina had previously shown effectiveness in removing radioactivity from the urine of children suffering from high levels of radiation from the Chernobyl nuclear accident). This study was done with rats that were exposed to x-rays. The study found that rats fed phycocyanin experienced a correcting effect of the radiation exposure (Karpov et al, 2000). 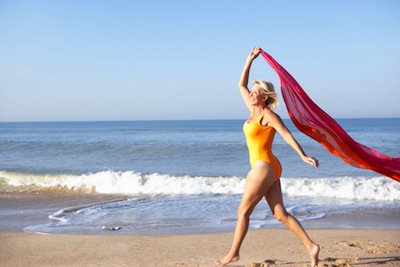 Similar to studies done on Spirulina in its entirety, water extracts of Spirulina that are rich in phycocyanin have shown excellent antiviral properties. In one such experiment done at the National School of Biological Sciences in Mexico City, the phycocyanin-rich extract inhibited the infection for herpes simple virus 1 and 2, pseudo-rabies virus and human cytomegalovirus (Hernandez-Corona et al, 2002). In another study, a Spirulina water extract was compared with a chlorella water extract. Since chlorella has no phycocyanin, it performed much worse than Spirulina in relation to liver disease cells. The extracts of these two algae both showed positive effects, but Spirulina had a stronger effect than chlorella. The researcher pointed out, “the growth inhibitory effects of aqueous Spirulina extract on human liver cancer cells was five times that of chlorella.” (Wu et al, 2005)

Earlier work at the University of 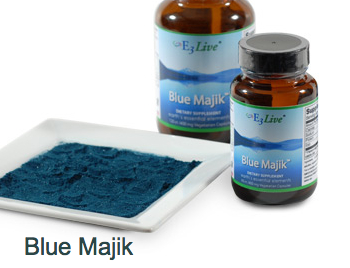 In my wellness program, I make sure to consume at least 400 - 800 mg of BLUE MAJIK in either powder or capsule form. This is 1 -2 servings. I take a double serving on days in which I am doing a detox/cleanse or am under extra stress. I embark on a detoxification program one day each week, 2-3 days each month, and 7-10 days with each change of season. Because the phycocyanin is so effective as an anti-inflammatory, immune enhancer, and superb detoxifier for the kidneys and liver, 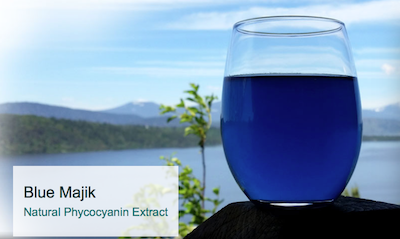 I always take an extra (800 mg) on these special days in which I am cleansing, detoxifying and rejuvenating my body.

When you take it about two hours before bedtime on an empty stomach, it will help you sleep like a baby, too. Countless people in my private practice, as well as many friends, tell me that they like to also use it as a sleep aid. I drink a large glass of alkaline water mixed with a teaspoon of this stunningly blue, delicious powder 90 - 120 minutes before I go to sleep. Sweet dreams indeed!

This simple recipe will knock your socks off. It takes about two minutes to make; it's delicious; it cleanses and rejuvenates the entire body; and it's so beautiful.

Blue Majik is a rich source of Phycocyanin — a powerful, deeply detoxifying antioxidant, an AquaBotanical, which can quench free radicals and has been shown to be a potent natural COX-2 inhibitor. Phycocyanin is being studied more and more by scientists around the world in recent years. The word “phycocyanin” comes from the Greek word for Algae “phyco” and the Greek word for blue “cyan.” Phycocyanin is an amazing water-soluble blue pigment that gives spirulina its bluish tint. Phycocyanin is only found in blue-green algae like spirulina—you can’t get it in other foods.

Having this Star Anise Blue Majik Cocktail daily will do wonders for your vitality, energy, appearance, and confidence!

Put the powder into a glass, add the liquid (chilled or room temperature) and mix well until the powder is dissolved. Pour into cocktail glasses (or other favorite glass) and top with a star anise as pictured. The color is absolutely resplendent so make sure you put this in a see-through glass. Enjoy this salubrious cocktail morning, noon, or night. The star anise is mostly for decoration although it will impart a small flavor note of licorice if you let it sit in the refrigerator for a couple hours or more.

Variations:
At my local juice shop, I get different fresh blends of juices... apple/rose, apple/lavender, apple/pomegranate, watermelon/mint, and more. All of these blends work well for this cocktail, too. A simple coconut water is delicious for this cocktail. It's always a stunning color and enjoyed by all ages, even children.

Star Anise:
This star-shaped seed pod of an evergreen tree is about one inch high with eight segments and a dark brown rust color. It get its distinctive licorice taste, like regular anise, from a chemical compound called anethol. However, the two are not related botanically. The star anise is a member of the Magnolia family. It's one of the spices in Chinese five-spice powder.
In traditional Chi 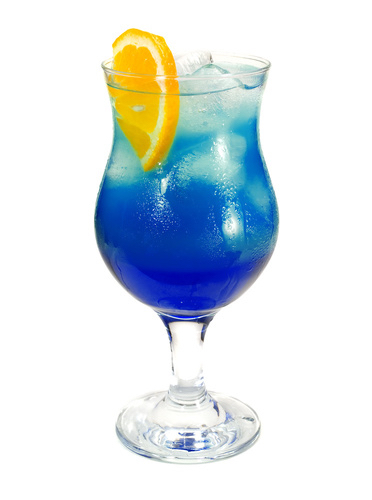 nese medicine, this beautiful star anise is prescribed as a digestive aid and to help cure colic in babies. It's available in Asian supermarkets and also in most grocery stores in the spice section. When you get it home, store the star anise in a sealed container in a cool dark place; it will last for several months. Throw it out (or put it in your garden's soil) once the flavor fades. If you use it in your simmered or other dishes, star anise is usually added whole (don't break it up into pieces) and discarded before serving.

As pictured in the photo to the left, stir about 1/8 teaspoon of Blue Majik powder (or the contents of about one capsule) into a glass of chilled water, coconut water, orange juice, or other favorite beverage, add in ice, top with an orange slice, and enjoy! Who wouldn't want to savor every sip of this colorful, health-enhancing beverage/cocktail?

Variations:
Sometimes I'll add in a few vanilla bean seeds and/or a few whole blueberries or raspberries. Experiment and see what you come up with to tickle your tastebuds. 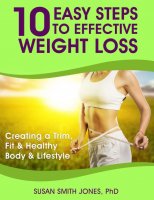 Get this Body-Enhancing
E-Book PLUS 3 More
Spectacular Gifts Today!
Details! 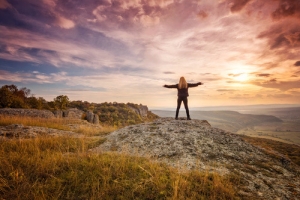